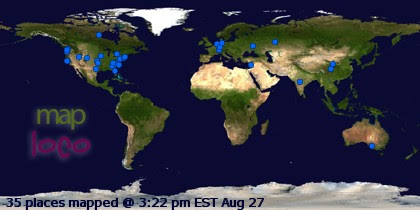 TEACHING IN THE NIGHT MARKET 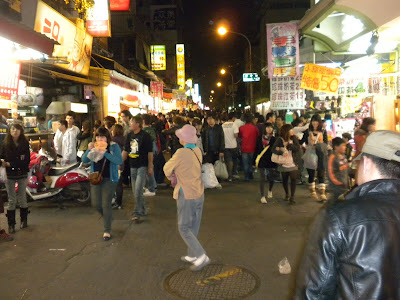 This is the "Night Market" packed with hundreds of people socializing, shopping and eating. This is where new missionaries are brought their first night in Taichung, Taiwan teaching the gospel standing on a "Dan Jones" Box in the center of the busy street packed with people. They had arrived in Taichung just about twenty hours earlier. We come out to give support, sing hymns and encourage the new missionaries as they bear testimonies in their new language, Mandarin. It is a real confidence builder for the missionaries. After bearing their testimonies they each go with a seasoned companion and teach among the crowds of people. From tonights efforts collectively the missionaries received 87 referrals. President and Sister Hoer are in the center of the picture. We had twenty four Elders and Sisters with us. 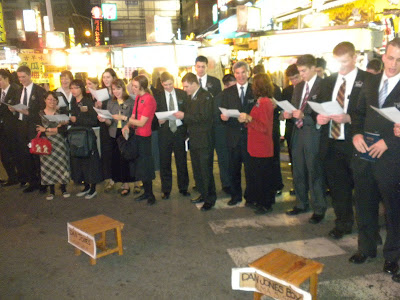 While I was acting as a photographer for the mission Sister Greene, at the far left in the picture, joined in with some of the missionaries singing "Love at Home". The boxes that they individually stand on to preach from is in the forground. 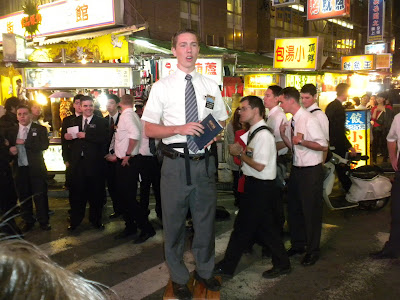 We have a few Rexburg, Idaho missionaries in our mission. Above is Elder Lundin and the picture below is of Elder Gardner, who just arrived with this new group of missionaries. 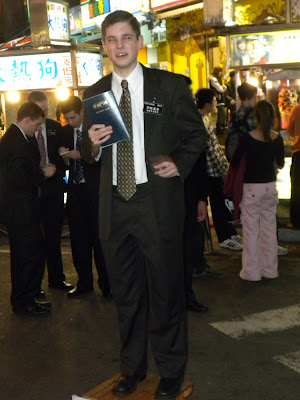 Labels: The Book of Mormon is received well in Taiwan. 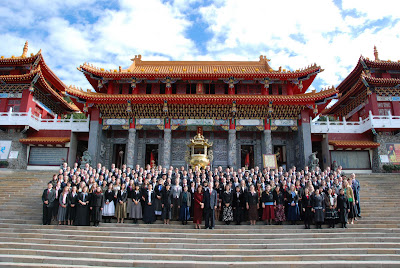 164 Missionaries on the steps of a Daoist Temple at Sun-Moon Lake. It was a major production to get everyone lined up so all could be seen. 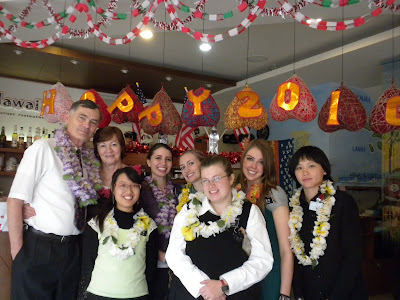 The popular "Hawaii 51" restaurant not far from the mission office. The owner of the restaurant is taking the missionary lessons and one of the young men working there is a member so they give all missionaries a large discount when we go there to eat. They have American hamburgers, fries, onion rings and all kinds of other Western dishes. A hamburger with fries costs 160 Taiwan dollars, about $5.00US, but she discounts it to us for $99. The exchange rate here is about $1.00 to 32 Taiwan dollars. The six sisters with us are great missionaries, Sisters Chen, Sollis, Infanger, Bretzke, King and Tung. 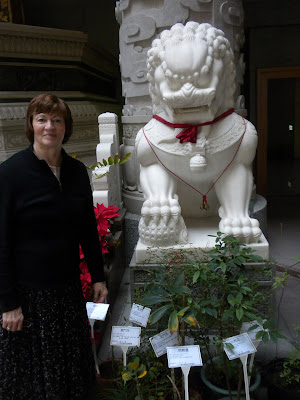 Inside a very ornate Buddhist temple, which is housed on the first floor of a high-rise building owned by a Buddhist television station in Taichung, are two stone Chinese Tigers. Below is a huge brass Buddha with an equally large brass insense burner. The walls and the ceiling are covered with thousands of impressive personalized brass plaques of financial doners. 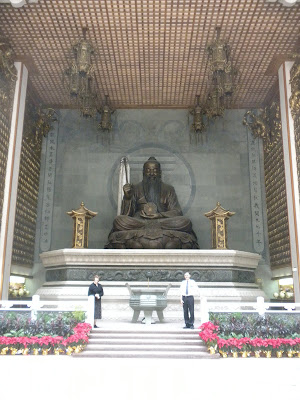 We often passed this site on the way to Costco! 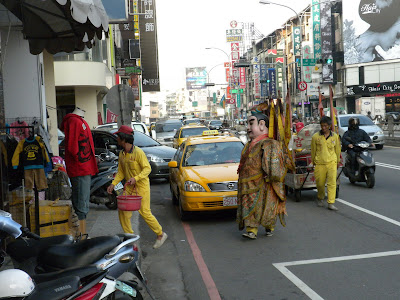 A group of young men dressed up like ancient Buddhist characters, beating on drums and collecting money from shop owners and people on the street for charity.

EVER CHANGING LIFE IN TAICHUNG 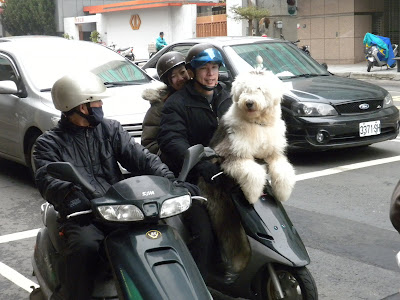 It is interesting what you can see on the streets and in the buildings of Taichung. There is little question as to this man's best friend who gets to sit up front for the world to see! He was thrilled to have me take this picture, before they took off down the street on the scooter with the dog's ears flapping in the wind. 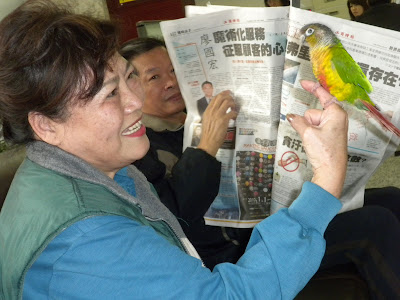 While sitting in the Cathay Bank today a sweet lady sat down nest to us and sitting on her shoulder was a cute little bird. She held it up for a picture and then she set it down on the back of the bench and it quickly jumped on JoAnn's shoulder and gave her a kiss. Actually I think that the bird spied some left-over lunch on her teeth and decided that it was his for the taking. 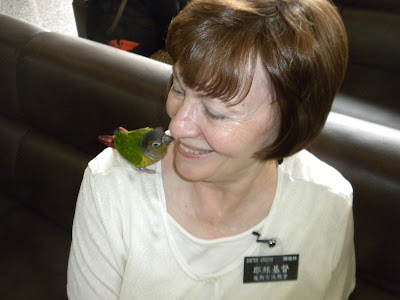 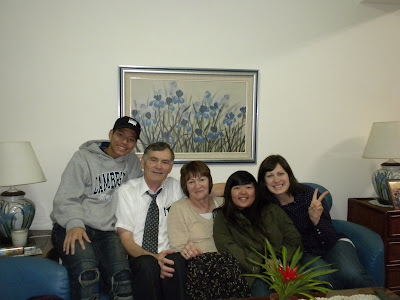 We have English teachers and young members over quite often. Bush, the boy next to me, is soon to turn 18 and though his dad isn't against him becoming a member of the church he felt Bush needed a little more time to decide for sure if it was right for him to be baptized. Angela, next to JoAnn is a young member and a helper to us all. Lisa Hammon, holding up the "victory" sign, is an English teacher and has just finished teaching in Taichung. She leaves in five days and will travel all over Asia for almost three months before returning home to the States. The new English teachers arrived a few days ago and ten of them showed up at church yesterday. Eight are LDS and all are college graduates. They will be a great blessing to our small English speaking branch. 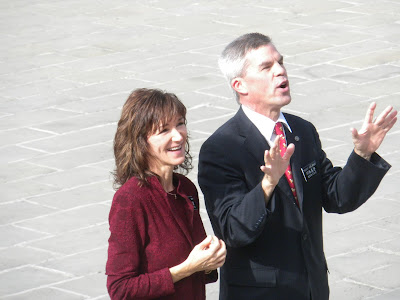 President and Sister Hoer trying to get 164 Elders and Sisters to line up on the steps of a huge temple to have our picture taken. It was a remarkable feat to get us all lined up according to height on about a dozen or more steps so that every face could be seen, and then to stand still long enough to have a picture taken. 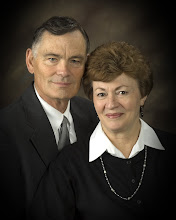